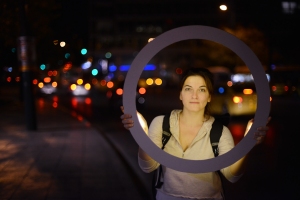 She is a graduate from the Drama Department of the Faculty of Fine Arts at Aristotle University of Thessaloniki, with a degree in Set and Costume Design.

For her stage design work, Eliza has been awarded the 1st UNESCO Prize for the Promotion of the Arts and her work has been presented at the 2007 PRAGUE QUADRENNIAL Exhibition.

She has been awarded for her innovative lighting design in Relic performance (by Euripides Laskaridis, presented at Barbican Center) at the Theatre and Technology Awards, Theatre Fullstop, London, October 2017.

In lighting design, except from her personal theatre work, she has explored the creative fields of light installation and public light art, as a founding and active member of the creative group Beforelight (www.beforelight.com) BEFORELIGHT have presented their work in art venues, such as the Thessaloniki Biennale of Contemporary Art, Video Art Athens, Museumnacht Rotterdam, Harvard University ”Made in Greece” Exhibition, Acropolis Museum etc. and in public spaces, such as Splantzia Square/ Chania, Pittaki Street and Gallery of Merchants/ Athens, Mariaberg and Old Hickoryplein/ Maastricht etc. Their URBAN LIGHTSCAPES project (www.urbanlightscapes.net), highlighted the possibilities of artistic lighting as a starting point in changing the perception of urban spaces, and created an open dialogue between european citizens, artists, academics and professional lighting designers.

One thought on “About”